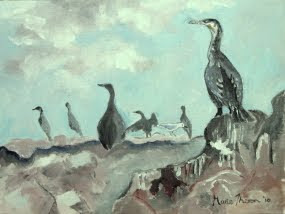 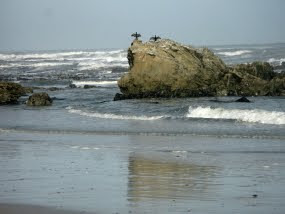 We are very fond of these large black birds that are so poised and upright! I think they hold the moral high ground too, as they are not scavengers of domestic food like the seagulls. (There is one seagull visiting in the painting.) They are known for forming long lines over the sea, rising higher and lower as they search for shoals of pelagic fish like pilchards.

Phalacrocorax Capensis is its Latin name and it refers to the chrome yellow patch on the throat at the base of the bill. This patch is brighter in breeding season when these usually quiet birds get quite vociferous, shouting gheeee and ghaaaa, where they breed on the islands off the West Coast.

We once found a dead cormorant that was ringed. The phone number was that of the Pretoria Zoo who referred us to the University of Cape Town. We learnt that the bird was ringed at Dassen Island 6 months previously! Why we care, is that on the IUCN Red list of threatened species Cape Cormorants are listed as "near threatened", the greatest dangers being oil pollution and predators as well as disease.

This was one of those absolutely wonderfully warm autumn days. I went overboard taking photos but will just show the one where they stretch their wings to dry in the sun after fishing. My palette was ruled by white and black, Indian red and Prussian blue for the grays in the clouds, rocks and birds. I added cerulean blue to this limited palette to paint the sky.
Posted by Marie Theron at 6:17 PM